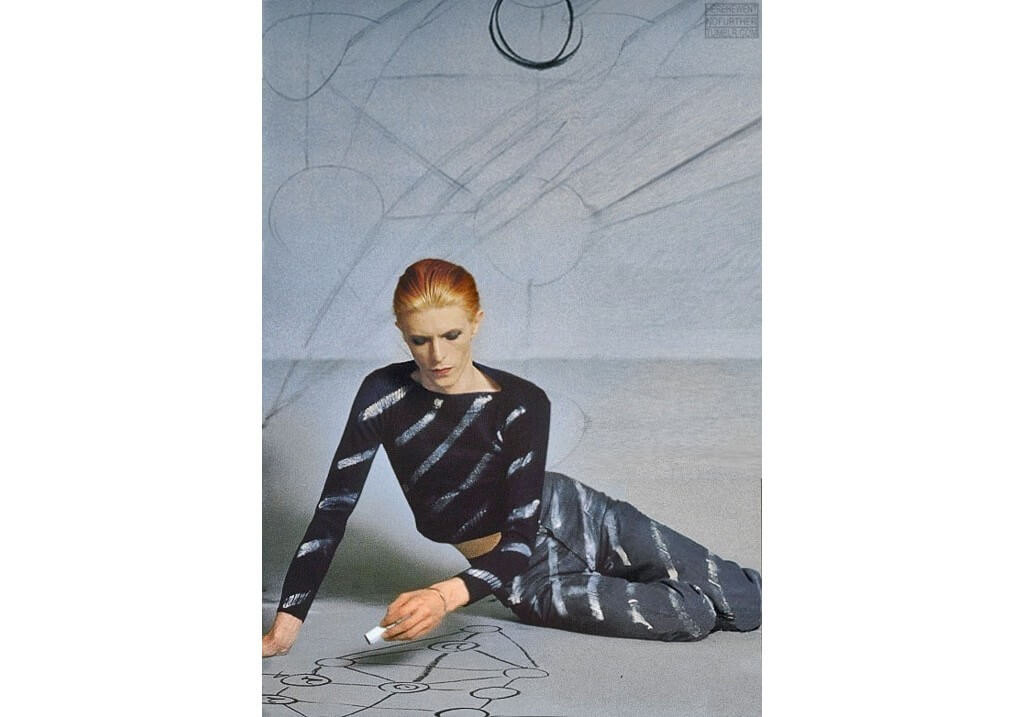 What is art? What is rock music? It's difficult to describe its codes, gestures, aestethics and its perception for the most part it is something that must be experienced, and only as an expression of culture — it being in a constant movement of restlessness and mirroring all graspable parts of society. How can the feverish emptiness of endlessly repeated ecstasy be transformed into something that can be felt and understood, something heard and seen and be purchased? After all, music is not only qualified through the consciousness of its creator but also through the states of mind created by its perceptors.
Frank Zappa expressed it in 1974 when Fido (a 'modified dog'?), was questioned about "conceptual Continuity" and answered thus: "The crux of the biscuit is the Apostrophe(')" ('Stinkfoot').
However, in this essay I am not so much concerned with the audience but with the performer/persona known as David Bowie. Bowie is not a single character, but rather a host of Bowie–personæ: A wealth of possibilities that exists behind costumes, symbols and concepts.

Apart from being a sometime brilliant musician and dilettante artist, Bowie's religious perspective and compositional techniques mirror an eloquent fragmentary projection of society. "I'm actually very nineteenth century — a born Romantic" he uttered in 1995. His work resembles that of many European post–romantic novelists and thinkers, such as Hermann Hesse (the Steppenwolf), Gustav Gründgens (his most famous rôle: Mephistopheles in Goethe's Faust) and Aleister Crowley. Indeed, the Gesamtkunstwerk 'David Bowie' crystallizes this splintered reality into cultural artifacts, and these in turn coagulate into new realities.
David Bowie, born as David Robert Jones in 1947, is seen by some as a sort of 'Renaissance Man' whose professed 'universality' is an attempt to show the apex of evolution by reassembling the fragmentary pieces of our society; thus, he resembles many occultists.

Read More - The Laughing Gnostic —  David Bowie and the Occult