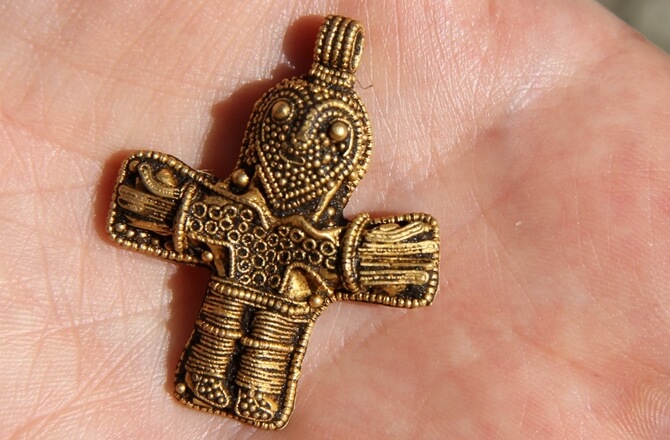 A rare Viking crucifix pendant emerged from a Danish field, brought to light by an amateur metal detectorist two weeks before Easter.

The small gold object, made in the shape of a man with outstretched arms — the image of Christ on the cross — is estimated to be Denmark’s oldest crucifix.

Dating from the first half of the 900s (10th century), the pendant has shed new light on Christianity in Denmark, according to experts at the Viking Museum at Ladby, where the crucifix is now kept.

“It’s older than Harald Bluetooth’s runic stone in Jelling,” the museum said in a statement.

The stones in the town of Jelling feature a figure on the cross and commemorate Harald Bluetooth’s conversion of the Danes to Christianity.

Until now, the massive runestones, estimated to date from 965 A.D., were believed to be the earliest depiction of Jesus on a cross in Denmark.