History of the Buddha

In 563BC in Northern India, a baby was born into a royal family. His name was Siddhartha Gautama. He grew up in wealth but was greatly moved by the suffering he saw around him. At the age of 29 he left his family, resolving to find the key to human happiness. He sat at the feet of the great religious teachers of the time, but no one knew the cause of human suffering and how to overcome it. After six years study he had an experience in which all ignorance fell away. From that day onwards he was known as the Buddha which denotes “Awakened One”. His enlightenment came whilst meditating under the Bodhi tree. 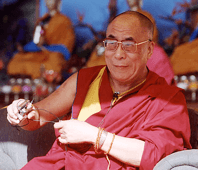 The Bodhi tree is regarded as one of Buddhism’s most auspicious symbols. The wood of the tree can be used to make Mala beads. These are the Buddhist rosaries used to count Mantras or chants. Buddhist monks will often carry these with them – Tenzin Gyatso, the current Dalai Lama is rarely seen without a set. These mala beads most commonly have 108 beads, 108 being regarded as a particularly auspicious number to Buddhists.

To me, it meant nothing but; as I learnt more about Buddhism I found the same number occurring again and again. There are 108 symbols of the Buddha or Lakshana, such as the Bodhi Tree, the lotus to symbolise pure birth, elongated earlobes, short hair and the chakra wheel, which symbolises universal law.

There are 108 feelings described to Buddhists;

There are 108 books in the teachings of the Buddha - the Kanjur. There are 108 states in overcoming sinful desires that must be reached to achieve enlightenment or Nirvana. Monks will make 108 circumambulations around an object of reverence or Khorra. Many temples have 108 steps such as the temple at Guang-Zong. Inside the temple the bells will be rung 108 times for the Buddhist New Year.

There are 108 Boddhisatvas; beings that have reached enlightenment but have resolved to stay in our realm to help others on the path to enlightenment.

The symbols of the Buddha can also be seen in the many statues found throughout the Buddhist countries. In the temple of Wat Pho in Thailand is the great reclining golden Buddha. He is about the length of a football pitch and features unusual feet with elongated toes, covered in symbols. These Buddha Footprints, or Buddhapada, are found in many countries such as Thailand, India and the Union of Myanmar, which boasts the largest Buddha footprint in the world. The symbols on the footprints are, once again, auspicious symbols and symbols of the Buddha and they vary in their arrangement and number although 108 features again and again. The Bagan footprints in the Union of Myanmar all have 108 symbols. On schematised diagrams, the chakra wheel can be seen as the central image, with the surrounding 108 symbols arranged neatly in boxes. These are typical of the Buddhapada. 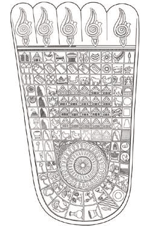 So – why 108? At first sight, this does not seem like a particularly significant number. I could find no explanation in Buddhist or Eastern texts for its symbolism or its origin as an auspicious number.

It does however boast an immediate connection with the number 6:

Six, the perfect number within the decad, or 1+2+3 is the number of nature and also a significant number in Buddhism:

There are Six perfections in Buddhism;

There are six realms of rebirth;

Looking further into the significance of 108, I used the tool of my trade, the computer. Using the programming language called LOGO simple commands can be used to move the “pen” across the screen and create geometric shapes. Using this to draw a shape, turning through 108º each time produced the following result:

A 10-sided figure was produced by moving through 108 degrees until the starting point is reached again. Suddenly, there is not only a direct connection to 6 but also the decad and the Tetraktys; 1+2+3+4.

The Tetraktys itself is highly significant:

1 represents a point, 2 length, 3 a plane or surface and 4 solidity or space.

10 is the perfect number, the return to unity and the foundation for counting. In Buddhism, there are 10 positive and 10 non-positive deeds, 10 planes that are crossed to reach Buddhahood, 10 paths to evil; killing, stealing, taking intoxicants, lying, setting one against another, abusive or rough speech, unbeneficial speech, false belief, ill will and covetousness.

In other cultures 10 is also significant. In Solomon’s temple there were 10 candlesticks, 10 tables and 10 lavers. There were 10 Levites to minister to the Ark and the cherubim were 10 cubits tall.

Having found a connection with 108 I returned to the mala beads. There are also strings of 25 beads commonly used for counting Mantras. Entering this, in place of the 108 degrees in LOGO, draws a figure with 72 sides. The number 72 should be immediately familiar to Fratres as there are 72 steps in the jewel of the order. If you draw a figure using 72 degrees you will produce a 5 sided figure – again the pentacle being a feature of the jewel. The pentacle is also a representation of the planet Venus, it’s orbit following a pentacle in the sky when viewed from earth – “As above, so below”; A philosophy which is found in Buddhist thinking, as well as Rosicrucian and Pagan.

The mala beads are also commonly found in strings of 60. In geometry this (60º) produces a 6 sided figure and returns us to the number 6 already discussed in its connection with 108.

Geometry and numbers are woven throughout the fabric of Buddhism. The student of Buddhism will find many numerical devices to simplify and illustrate the teachings of the Buddha. There is an immense amount to discover and I have had to be extremely selective with inclusions for this paper in order to keep my finds to a manageable (and readable!) quantity.

I hope that I have shown a convincing connection between Buddhism and geometry and a possible reason for the significance of 108.

The Meaning of Life: Buddhist Perspectives on Cause and Effect, His Holiness Dalai Lama Wisdom Publications

The Way To Freedom, H.H. Dalai Lama, The Library of Tibet

One Hundred and Eight Feelings, Translated from the Pali by Nyanaponika Thera, Buddhist Publication Society