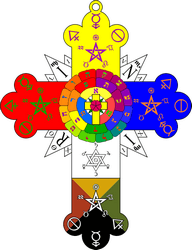 The Golden Dawn is a magical order founded in 1888. Since its beginnings it has been one of the largest single influences on 20th-century Western occultism.

By the mid 1890s, the Golden Dawn was well established in Great Britain. Although no directly chartered temples exist today, there are several societies that continue the ritual and methods of the original Order.

The Golden Dawn has had many members of note and include Israel Regardie, Eliphas Levi,  Algernon Blackwood, W. B. Yeats and the occultist Aleister Crowley.